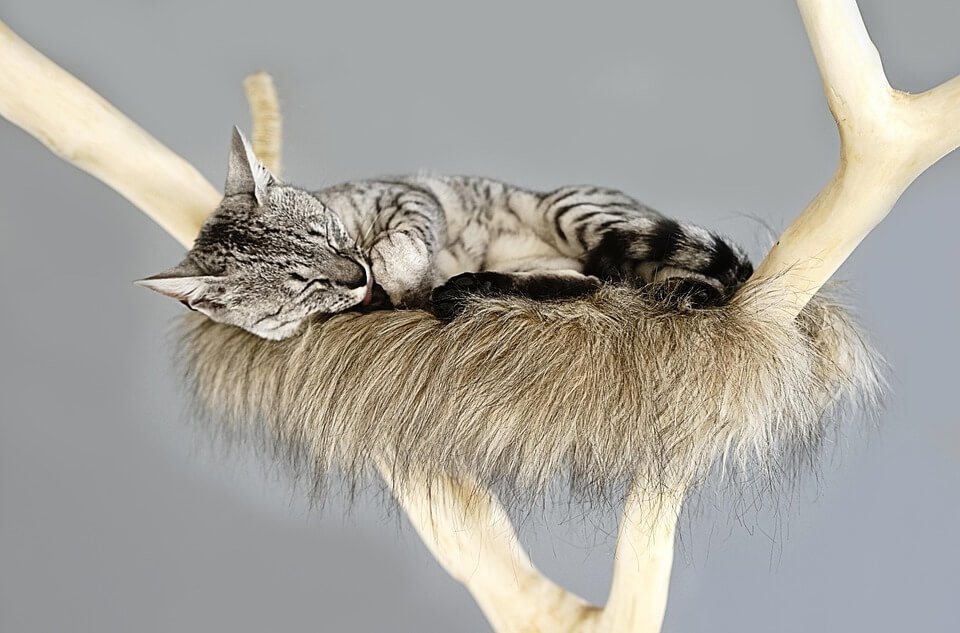 One of the most common characteristics you will observe in your cat is scratching. Whether it is scratching furniture or expensive upholstery, the damage can be quite difficult to repair. Additionally it can also be quite money-intensive as a process. To eliminate this problem, it is advisable to opt for a cheaper alternative: the scratching post.

What is a scratching post and what does it do?

In the simplest terms, it is a cylindrical section that is wound with a certain type of material. These include cardboard, carpet or sisal (rope). It is best to find out which one your cat has a preference to before getting one.

Scratching posts, overall, help in ensuring that your cat does not end up scratching precious things around the house while still continuing to let him scratch a designated area. It is advisable to keep the post static so that there isn’t much destruction as well.

Despite purchasing one, training your cat to only scratching on one can be quite the task. There are a few tips and tricks that can be deemed useful.

While this method might be a little redundant to a few cat owners, there are still mechanisms to maneuver around this step. It is best to start from the earliest possible because it is easier to incorporate a desirable trait from the beginning rather than eliminate an undesirable one later. Additionally cats tend to use one scratching post so it is best you purchase one if you’re getting a kitten and take the one it already had if you’re adopting, if that option exists. This would also help in the acclimatization process as it would act as a familiar object in a new home.

2. While purchasing, keep height, sturdiness and angle in mind

Very often, cat owners make the mistake of not buying the correct scratching post that their pet would use. This can be owing to two important factors: height and how much it can withstand. One of the most important reasons that a cat scratches is to be able to properly stretch out its spine. Owners need to be vary of that fact while buying because if the scratching post is not high enough or at an awkward angle, your cat might not be incentive's to use it.

The other factor is whether it can withstand the movement.

There are two ways to ensure this

Cats would not find the post challenging if there was no resistance from the object’s end and could be another factor why it prefers not to use it.

For the angle, this too plays an important factor. While some cats like lying down and stretching, others might prefer a vertical support instead. Hence it is best to try a few out like flat pads, upright scratching posts or even inclined platforms.

3. Check out the different textures that are available

As mentioned before, there are a few materials that are quite popular for scratching posts.

While the latter two are big among pet owners, a few believe that introducing your cat to carpet can be quite confusing. However, this is where you would have to figure it out with your specific cat because each one has their personal taste when it comes to which one they would prefer.

4. Try and duplicate what they are currently scratching.

If you take a few minutes to notice, you will be able to figure out what surface they are currently scratching and the angle at which they like to scratch. For example, if they are choosing to scratch the floor carpet, then it would be best to get them the flat pads instead of a vertical post. One of the best in the market is the Smart Cat Bootsie Scratcher because not only can the angle of the post be adjusted, it can also be laid on the ground or held up against the wall.

5. Making sure there are enough scratching posts

One of the most important reasons to do this is because cats are known to mark their territory. It is easier to follow a 1+1 rule which allows for one post per cat and another one additionally to that one. This is to ensure that the cat has enough place for them to mark and does not opt to go for furniture, carpets and sofa instead.

6. Where you keep it is primary

The placement of this device makes all the difference. Again, through a little research, you would be able to identify the rightful position. It is best not to keep it hidden-at least as first such that the cat can get used to the placement. Later on, it can be changed to a more discreet spot. Along with this, it is also useful if you could place the post nearby their sleeping areas as it is a common observation that cats like to stretch right after they wake up.

7. How to incorporate positive reinforcement

This is a mechanism that has proven to be successful for a number of pets. What positive reinforcement works on is rewarding the good qualities and simply ignoring the ones that we particularly do not like. The same can be executed with a scratching post. For example, each time your cat chooses to go to the post to scratch instead of the sofa or the dresser, you could either lay out cat treats or give them their favorite toys. In this way, it is easier for the cat to understand which one of the two options to choose from.

Alongside this, to make sure that your cat chooses the post, you could use rope or fishing-rod type toys around it such that they are attracted to it. Once they know how enjoyable the scratching post is for their claws, it is most likely to continue.

While cats are irresistibly cute as pets, their constant scratching can become quite a problem. Through the methods listed above, it is easy to train your pet into using a scratching post instead of going for alternative options around the house. In this way not only does your cat get a secure and enjoyable experience, as an owner , you can eliminate any possible damage as well as additional stress.

I am Anoop Nain, proud father of four rescued dogs and two Flemish giant rabbits. Besides being a full-time dog father, I am a freelance content writer and an educationist, with more than 6 years experience in the field of content writing. In the span of six years, I wrote for various industries but one project that remains closest to my heart is my stint with People for Animals as their social media page manager. It was while working with them I got an opportunity to educate people on animal rights, pet healthcare, animal welfare and various other issues pertaining to animals.

How to Make a Cat Tree That Looks Like a Tree

How to Get an Aggressive Cat into A Carrier

How To Get An Aggressive Cat Into A Carrier : Easiest Method

How Long Can a Cat Stay in A Carrier?

How Many Litters Can A Cat Birth In One Year