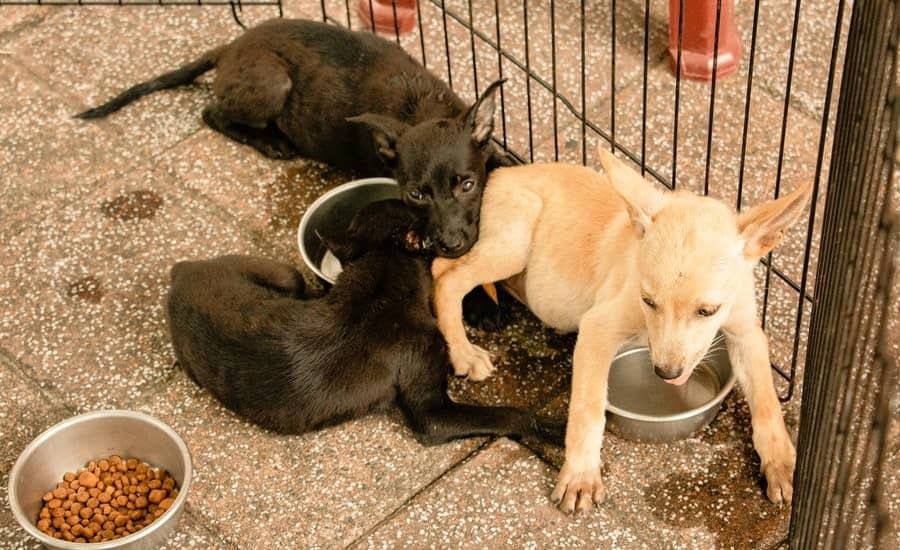 Why Your Puppy Should Avoid Carbs

Can my puppy eat potatoes? What about peas? Are kibbles healthy as long as they don’t contain corn or wheat? These types of questions are fairly common, and mostly stem from marketing claims that certain carbohydrates (like peas and potatoes) are acceptable additions to your dog’s diet.Let's find out Why Your Puppy Should Avoid Carbs.

However, they’re exactly that - marketing claims, which are made by people who want to sell you their products. The truth is that there are some important reasons why feeding carbs to your canine companion is a bad idea. Let’s run through them before looking at the alternatives.

During harvesting or after being stored, crops can be contaminated by mycotoxins, which are a by-product of mould and fungus. Corn, barley, wheat, rice, soybean and sunflower seeds are some of the most common victims. One study performed from 2004 to 2013 found that over 70% of grains destined for pet foods had mycotoxins.

A particularly harmful mycotoxin is aflatoxin. It’s the most carcinogenic substance in the natural world. Aflatoxins can affect several organs in your pup’s body, most notably the liver, where it can contribute to immunosuppression and cancer. The effects build up over time, making it difficult to notice in the early stages.

In another study from 2015 on 48 different dry dog foods, all of the budget foods and all except one of the premium foods had no less than two types of mycotoxins. Additionally, 25% of them had four different types.

Some natural and man-made substances can negatively affect the absorption of vitamins and minerals in the body, as well as interfering with digestive enzymes. They’re known as antinutrients. The grains, beans and legumes that are commonly found in kibbles contain antinutrients and they can rob your puppy of essential nutrition.

Phytic acid is an antinutrient that binds to minerals like copper, iron and magnesium, making up to 80% of them unavailable to the digestive system. Another antinutrient is lectins, which can also damage the cells in a dog’s intestines.

This term refers to the rate at which a food raises your blood sugar. A small amount of starch or carbohydrates may not cause much damage, but higher quantities (which have a higher glycaemic load) can lead to insulin resistance. Keep in mind that most processed pet foods are 30% to 60% carbs alone.

Insulin resistance forces the pancreas to work overtime, leading to exhaustion and eventually a diabetic puppy. That’s not the only problem. Thyroid disease and some types of cancer also stem from insulin resistance.

There are even more risks to consuming high amounts of carbs. This includes:

So, what’s the solution? One is to feed them a low-starch dog food. That means one with less than 15% carbohydrates. The problem is that most manufacturers aren’t forced to give you a specific number. Preparing your own natural foods for your pup is another option, but you need to ensure that the diet you’re feeding is balanced and complete.

This can take a mountain of research to get right. Many natural foods are great for dogs, while others can cause a fair bit of harm. Your best bet is to leave it to the professionals and buy pre-made raw puppy food.

Bella and Duke is the leading supplier in the UK. Their subscription service allows you to get raw, natural meals that are based on your pup’s individual needs delivered to your door. Check out their feeding guide for puppies to learn more about what it involves and the benefits of feeding raw puppy food.

Why All the Carbs?

You may be wondering why so many commercial dog foods and treats have carbs in the first place. In a nutshell, they’re cheap. Pet food can be expensive to manufacture and carbohydrates provide energy, albeit not particularly well.

That’s why you’ll find that carb-heavy dry foods are supplemented with countless ingredients to make up for their nutritional deficiencies. Just read the labels on any bag of kibble. Choosing raw food and sticking to a natural diet will ensure that your pup doesn’t have to deal with the myriad of health problems that come with processed foods.

While your pup might seem healthy today, the worst thing you can do is ‘wait’ and keep feeding carbs. Even making small changes and adding in some protein and healthy fats (eggs, hemp oil, fish) will make all the difference. Adding in natural food will lower your dog’s glycaemic load and replace some of the nutrients that are otherwise absent from their diet.

Will A Dog Starve Itself To Death? These Facts Will Shock You!

Dog Muzzle And What You Need To Know Before Getting One

Why GPS Tracking is Important when Hiring a Dog Walker

How To Introduce Your New Dog To Your Current Dog

The Different Types of Dachshunds: Explained

Rawhide For Dogs: Is It Safe For Your Chihuahua?

How To Leash Train Your Puppy Or Dog