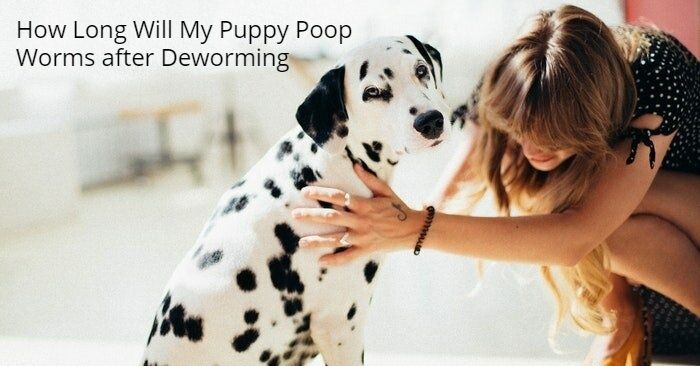 How Long Will My Puppy Poop Worms after Deworming

Puppies are best humans friend. Living within the homestead and kids playmate. Full of life and always thrilled as they wag their tails on and on. Puppies are always close to dirt, thrash and other murky things they find near them to sniff, lick and gulp it. So worms can as well be found in the pups and will need deworming frequently.

The main question that many pet owners ask is, how long will my puppy poop worms after deworming? This is exactly what you are going to find out in this article.

Worms commonly treated are hookworms, whipworm, roundworms, and tapeworms. They reside in the pup's intestine. De-worming the pup is important for them to be in good health and shape. More often the medication is given orally or a shot is given to kill the worms. It is recommended to de-worm them when they are about 2-3 weeks old. Let the vet always check on the puppy for any worms yearly.

Where Do Puppies Get Worms?

This is probably the first question that you should ask yourself before you think about deworming your puppy.

Food can be a source of worms especially when it is infested by worms. When your dog eats such food that is contaminated by parasites, they can get worms. It is important to know the healthiest food to feed your dog.

According to the University of Georgia, College of Veterinary Medicine

it is important for a vet to check if your dog has worms once every year. This will help you get the right medicine to get rid of the worms. You can know that your dog has worm infestation when you find the following symptoms

What Should I Expect After Deworming A Dog?

Dogs commonly use tablets and spot-on to deworm. Get the right prescription from the vet. Just make sure it ingest all the medication given. Dogs are mischievous and may spit the medication out. Should it vomit out, be ready to repeat the process of medication again. It is best given with small portions of canned food or administer the flavored tablets. If heavily affected by worms, then an injection is given for quicker results.

You may sight dead worms on Dogs poop, which is good as it indicates the worms are out of the dog's system. Some worms are ejected when broken in pieces others in the whole form and paralyzed. Puppies populated by worms end up vomiting the worms out. It looks gross but at least they are out of the Pups body.

The Puppy may experience gastrointestinal discomfort making it lethargy, lack of appetite, and weak. Also, it may lack thrill. Just to note, dogs being treated heartworms, are more at risk to suffer severely from pulmonary thromboembolism condition. When worms are dead due to the medication given, they may cause blockage to the pup's arteries as the heartworm flows out and may lead to death.

Pups may require more than one treatment to kill the worms completely. Just don't miss the recommended dosage given by the vet. And make sure over the counter med are approved of by the vet too.

The dog when well dewormed will poop right after when the medication starts taking effect. It takes approximately 12-15 hours after proper medication. And the dog will continuously poop worms for a number of days until all is taken out. The poop may be loose in nature that is diarrhea which can last as long as 3 days.

Anything beyond 3 days it is advisable to get a vet on board. So as to get a further diagnosis of why the diarrhea is prolonged. Some dogs may show blood in its stool. This can be due to the dead heartworms swimming out. Nonetheless, get it checked further on such streaks. Red streaks too can be seen right after treatment and may indicate rectal injury as it poops.

Stool will have worms that have detached from the intestines. The worms will be either dead or paralyzed. The poop may be yellow due to digestive irritation, parasites or infection. If the stool has mucus in large quantities then the pup's stomach is irritated. Parasitic protozoan makes poop turn yellow, indicating intestinal infection. Also, sever gastrointestinal infection makes poop be dark brown or black. Let the Vet treat it further.

White specks in poop will often indicate worm's ejection from the system, a few hours after treatment. Indicating a successful treatment of deworming.

What Are The Benefits Of Deworming My Puppy?

By administering medication to the puppies when infested or routinely, it reduces risk of severe sickness or even fatality. Gastrointestinal parasites that are found in the intestines can multiply if not treated well.

Deworming puppies prevents them from having health issues. A healthy dog is a healthy home too, as parasites are not transferred in the home and kids. Their overall health is good as they can also die from severe heartworms if not treated early.

One gets to have some mind rest. This is because many puppies don't indicate any symptoms of intestinal parasites. With the knowledge that the puppies are clean gives one peace of mind.

It is important to know puppies get affected by worms too. Deworming often is advisable as they grow up. Deworm puppies from the age of 2, 4, 6 and 8 weeks. When it is 12 and 16 weeks deworm again. For adult dogs, deworm twice or thrice in a year. Worms generally distress the overall puppy's health.

Adopting a Senior Dog? 7 Ways to Make Them Feel Comfortable

Dog Sitter Checklist for Owners: Everything You Need to Address

How To Properly Train A Dog With A Shock Collar

4 Ways To Get Rid Of Unpleasant Dog Breath

Top 7 Ways to Bulk Up Your Pitbulls